I finally went down to the theatre about 2.00 pm on Sunday 21st August and woke up in bed round about 7.00 pm that evening is some discomfort. Julia was there and apparently we had a conversation but I remember very little about it. She reports that I said I thought something had gone wrong with the operation as I had oxygen tubes up my nose and I don’t remember any one else coming back form the theatre with these. I also had a little more pain than I expected. She left after 30 minutes as I had fallen back to sleep. I was awake at midnight as I had to have some pain killers, a combination of paracetamol and Tramadol (officially a class A drug) and injection of Tynzoparin, a blood thinner. I had the first of these at midnight Saturday and I must have one every 24 hours for 28 days after the operation. These are to help avoid DVTs during a prolonged period of relative inactivity. By now a rather confused and near unintelligible man had been put in the bed next to mine and spent the next few hours calling for his wife. He thought he was in bed at home and that his wife was downstairs. He quietened down in the early hours and I eventually got off to sleep again.

I hadn’t eaten or drunk since 7.00 am before the operation. I had been given a mouth care pack back on the ward, basically a small amount of water and sponge ‘lollipops’ to moisten my lips and mouth, so by 7.15 am on the Monday I was looking forward to water, a cup of tea and some breakfast. During the operation and over night I had been on a hydration drip. I had to, and will continue until the catheter is removed, drink 2 litres of water a day to keep every thing flushing through. No fresh fruit on offer so a small portion of orange juice and a bowl of fruit and fibre cereal. Julia had brought me some fruit and a Sunday news paper the night before,placed on the seat beside the bed, but I couldn’t see these and hadn’t remembered. I was still quite sore and it was hard to change position in the bed without pain.

The doctors’ ward round took place about 9.00 am. I didn’t see Mr Singh, the surgeon who had carried out the procedure, but another surgeon who apparently assisted him. He told me that the tumour had been quite a lot bigger than expected and had poked out of the wall of the prostate a little more too. This meant they had to take a wider ‘clear margin’ in addition to the prostate on the side with the cancer than planned. There had been some discussion of whether they should remove the lymph glands in the circumstances but decided against it and stick to the original plan for surgery. Another complicating factor was that the prostate in that are had ‘stuck’ to the surrounding tissue. They don’t know yet if this was because of the penetration of the tumour or because of damage done by the targeted biopsies taken from the same area. All the material is sent of to the laboratory to grade the cancer in the prostate and to see if any cells had escaped into the surrounding tissue. I was warned that this increased the chance of needing addition radiotherapy but the results would be back in time for the consultation meeting 6 weeks after the operation. In the meantime we must just wait and hope for the best.

Later that morning Mr. Singh came to see how I was getting on and I told him what I had been told. He seemed slightly surprised. He confirmed what had been said but seemed slightly more relaxed about it. His assistant turned up at that point and seemed nervous that I’d now been told something different. I am assure him I hadn’t.

All that remained now was to get onto my feet and walk a few paces when I felt able and, all being well, got through the discharge procedure so Julia could come to pick me up and take me home. I had a couple of short and very slow walks down the ward corridor and by lunch time I was given the all clear to go home. Unlike last time I was on the ward after my bike accident, April 2015, I was to be discharged from a special unit in ward 19, the other end of the hospital, too far to walk but I would be picked up and taken there in a wheelchair. I found getting dressed and packing very painful and after a while went to the nurses’ station to request the pain killers I had, as is my normal practice, turned down in the morning. I handle low levels of aches and pains pretty well and have always preferred not to take drugs if not necessary as there is always the possibility of side effects some of which can be long lasting and damaging. However, I didn’t think I could get through discharge and then home by car without some help. They gave me another 2 paracetamol and 2 Tramadol and within 20 minutes or so I was feeling better. The nurse taking me to the dischareg unit came for me at that point and finished my packing and put my socks on for me, put my shoes on and tied my laces. The first time anyone had done this for me since my mother over 60 years ago! 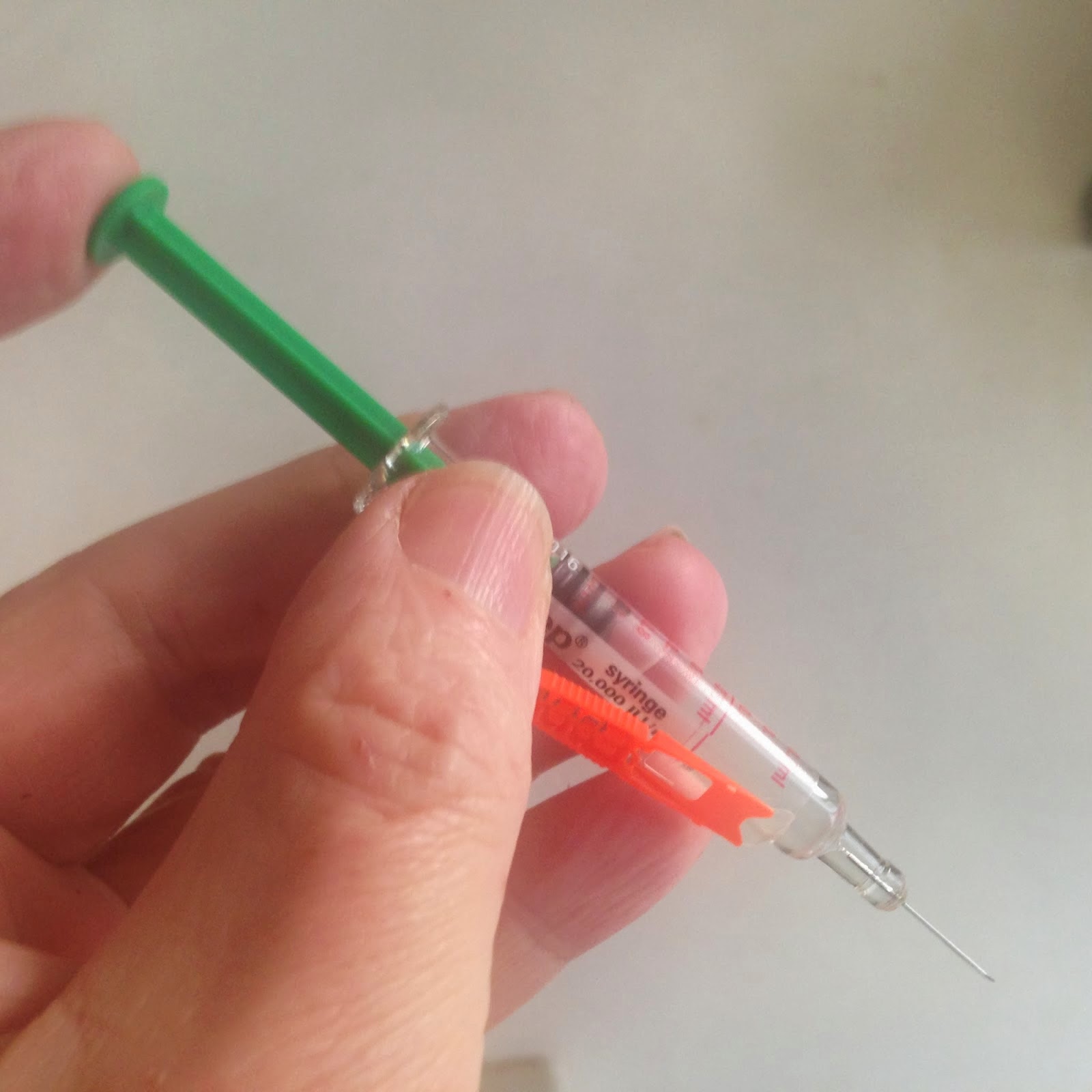 There was a slight hiccup and delay as my prescription for take home pain killers was wrong and had to go to another doctor to be altered. The discharge procedure took nearly 3 hours in all (it only took 1 hour on the ward last time) but went fairly smoothly. Most of the time was waiting for the prescription to made up by the pharmacist. I was given a packet of paracetamol and of Tramadol and two packs of Movicol, a mild laxative and stool softener. They were keen that I didn’t strain while going to the toilet especially as lack of activity could cause a degree of constipation. I was also given a pack of 28 preloaded disposable hypodermic needles for the self administered Tynzoparin injections. These could be done by a visiting district nurse but I had watched the first two given me by nurses and decided I would start of by trying to do it myself.

Then I was ready to go. I had phoned Julia a little earlier and I walked to the entrance with the nurse carrying my bags and medication so that Julia could just pull up and I could get straight in. She was there, it was about 4.20 pm by now, and I had an uncomfortable ride to Greengates in the beginnings of the rush hour traffic. However, it was good to be home and after a light dinner all that remained was to stay awake until midnight to give myself the my first injection.Although quite fearful about this it was OK and I’m sure I’ll get used to it. In fact you are given a 2 hour window either side of the 24 hour period so I did it at 10.30 and continued to do it at 10.00 pm, our normal bedtime, give or take. The next morning, Tuesday, we would plan my recovery programme – particularly exercise and diet.